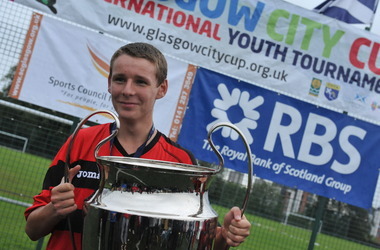 The role of Champions is shown to the right, over the past 18 years many Clubs have featured on a regular basis. Special mention to Erskine BC who had won the Tournament each year from Under 13’s and were only beaten 1-0 by Maryhill Juniors this year. Also to Clydebank BFC who are now turning up at the winners podium both at Easter and in August on a regular basis. Drumchapel Utd also featured again in 2011 regaining the title from South Camlachie when they beat Scottish Cup winners Celtic in a close 1-0 match at Under 21’s and also good to see some of our East Coast Teams through and challenging with Edina Hibs winning the Under 16’s 3-0 against Drumchapel Utd. Also to our Overseas Visitors